Digital radio switchover 'will not be complete until 2019'
Head of expert group says digital take-up has been slower than many in the industry hoped
http://www.guardian.co.uk/media/2011/no ... switchover

Next week the government will set out its plans to switch off FM transmitters in favour of digital radio signals.

But many people are still reliant on analogue radios. An estimated 95% of cars lack DAB equipment, and some people are rebelling against the FM switch-off.

80 percent of the households in Norway can receive DAB digital radio today, but a lot of work remains. New geographical areas will be covered, and locations that already have coverage will be improved and fine-tuned. The rollout will be completed well before the analogue FM network in Norway will be switched off in 2017, and is to be replaced by DAB (Digital Audio Broadcasting).
http://www.norkring.com/655/

This is coming at an important time for radio, and commercial radio in particular. With 90% of the population listening for more than a billion hours a week, radio remains relevant for the vast majority of the UK population. In fact, 56.7% of radio listeners in the UK are already listening to radio via digital platforms every week.*
http://www.mediaweek.co.uk/article/1224 ... isers-view 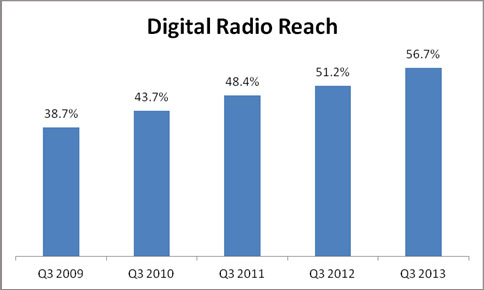 Ed Vaizey 'won't be pushed' into digital radio switchover date
Communications minister says there will be no switchover until most listening is digital after MPs voice fears for smaller stations
http://www.theguardian.com/media/2013/n ... hover-date

As expected, Vaizey did not announce a switchover date, with digital take-up slower than expected, accounting for just over a third of all radio listening.

The commercial radio trade body, the Radio Centre, had been pushing for a 2018 switchover date – when all national and most of the larger stations become digital only – but it remains to be seen if that will be achievable. Television completed its digital switchover last year.
http://www.theguardian.com/media/2013/d ... -ed-vaizey

Within two years from now, the shutdown of national FM-networks begins in Norway. The switchover will begin in the North and will be implemented region by region.
Av Mari Hagerup 16. april 2015

Thursday, the Ministry of Culture announced a national FM-switch off, to complete the transition to digital radio. Norway is making an historical move into a new radio era, being the first country in the world to decide upon an analogue switch-off for all major radio channels. With DAB and digital radio, listeners will be provided with more radio channels and greater diversity in content.

Thor Gjermund Eriksen, head of NRK, says:
- This is an important day for everyone who loves radio. The minister`s decision allows us to concentrate our resources even more upon what is most important, namely to create high quality and diverse radio-content to our listeners.

- We can finally complete the work that has been on-going for many years. This is the best solution for all listeners throughout Norway, as they now have a better radio.

Switch-off starts in Nordland county 11th January 2017 and ends with the northernmost counties Troms and Finnmark 13.12 2017.

NRK, P4 Group and SBS Radio will turn off all its FM broadcasts simultaneously in two of six regions. In four regions however, NRK Radio will lead the way in FM-switch off. Lasse Kokvik , CEO of SBS Radio says:
- The national radio industry have agreed upon a rapid and coordinated plan for the transition, with considerations taken on not giving unreasonable competitive advantages through FM-closing.

Look to Norway
Today’s decision makes Norway the first country in the world to set a final date for FM-switch off. Several countries in Europe and Southeast Asia, however, are in similar processes, choosing DAB-technology as the backbone of future radio distribution.

Ole Jørgen Torvmark , CEO of Digital Radio Norway says:
- The White Paper from 2011 and a unique collaboration between the radio industry is the main reason why Norway is far ahead in the transition to digital radio. Many countries are now looking to Norway to learn.

Ensures a long life for radio
Radio on digital platforms ensures the radio media a long life for years to come. The Radio Industry is better equipped to evolve with listener`s needs and are thus better enabled to adopt to the ever changing patterns of media consumption.
Norway began the transition to DAB in 1995. In recent years two national and several local DAB-networks has been established. 56 per cent of radio listeners use digital radio every day. 55 per cent of households have at least one DAB radio, according to Digitalradio survey by TNS Gallup, continuously measuring the Norwegian`s digital radio habits.

STATS FOR DIGITAL RADIO IN NORWAY *

- 56 % of radio listeners use digital radio daily
- 44 % of listeners only use FM radio daily
- 20 % of private cars are equipped with DAB radio
- 55 % of all Norwegian households have at least one DAB radio.
- 7.9 million radio sets will be affected by FM-extinction. FM radios can be upgraded or recycled.
* Digital radio survey , TNS Gallup 2015